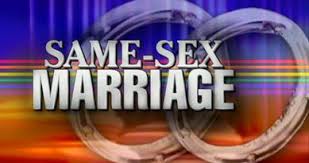 Opinion among many news commentators as well as actual news reporters is that the Supreme Court will once again try to avoid making the difficult decision, as it did with the “Obamacare” ruling, by finding a technicality that allows them to do nothing about Proposition 8 or DOMA (Defense of Marriage Act). As Sally Kohn, one of the FoxNews.com ‘opinionators’ admits: “The Supreme Court will either ride the wave or try to block it or dodge it, but ultimately it doesn’t really matter. The tide has irrevocably turned.” (NOTE: The headline (see “Reference”) for this Fox News Opinion piece, because Fox News vocally opposes same-sex marriage, made no attempt to be fair or balanced by unfairly implying that because Chief Justice Roberts has a cousin who is gay it will sway his opinion.)

Ms. Kohn is right that the tide has turned. The majority of the public now supports the right of same-sex couples to marry and obtain all the benefits and rights that go along with a legal marriage but, at the same time, Ms. Kohn is very wrong! It does matter a great deal what the Supreme Court says when they make their ruling. Even the most Conservative Justice will have a hard time dismissing the FACT that to deny legal marriage based on gender, race or sexual preference is clearly unconstitutional. Not only is it unconstitutional now, because public opinion has turned to favor same-sex marriage, the opposing view has always been unconstitutional.

The argument used to be that because the majority of the California voters voted for Proposition 8, those who opposed it will have to live with it and because other states have adopted DOMA or DOMA-like provisions into their state constitutions, it is legal in those states to refuse marriage to same sex couples. Those were false arguments! Public opinion on this issue does not matter nor do biblical admonitions!

The U.S. Constitution overrules state laws that are unconstitutional at the Federal level and if our Supreme Court Justices have the intestinal fortitude to interpret the Constitution correctly they can do nothing but overturn Proposition 8 and DOMA.

This is not, as most media outlets have described it, a “gay rights” issue; this is an issue of equal justice under the law for all American citizens, without regard to their sexual identity or their choice of a marriage partner.