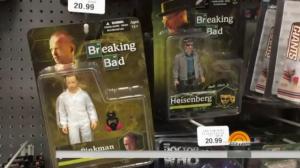 Aaron Paul, a star on the TV show Breaking Bad is protesting the fact that two Breaking Bad action figures (Walter White and Jesse Pinkman) have been pulled off the shelves of Toys R Us and then he gets the “ass of the month” award for suggesting that Barbie toys somehow “pose more harm” than the two drug dealing murderers in the Breaking Bad show.

I would hazard a guess that most kids who play with Barbie and Ken are not likely to become felons. On the other hand, neither are kids who play with breaking Bad characters likely to develop drug habits or kill their playmates. I would also guess that most kids who are raised by violent, abusive parents who live in and around the drug culture probably WILL develop those behaviors. I may be out of line saying it but at least half of the parents in the world seem to be incapable of handling the job of raising responsible, honest children.

The entertainment industry caters to adult tastes (the adults, not the kids, are the ones with the money to buy what they are selling). Sexually explicit’ and ‘graphically violent’ are definitely adult tastes and they are profitable. That’s NOT the tragedy!

It’s almost Halloween and every TV station and movie theater will  be showing movies that feature violence and a fair amount of sex. We all watched these graphically gory movies as kids (at least I did) and the vast majority of us have not been ‘corrupted’ by them. Why? Because most of us also had parents who did not confuse movies and reality. We had rules and, if we were lucky enough to have good parenting  we also had consequences (sometimes painful consequences) for unacceptable behavior. The consequences are what we remember most.

I remember and no doubt will always remember one day when I was about 5-years old I sat down in the living room in front of the TV to watch a wrestling show that already was showing on the TV. It was exciting to see these guys roughing each other up and throwing each other around (it was like my Saturday morning cartoons with real people) but then my excitement turned to stomach-clenching fear when one of the wrestlers took off his cowboy boot and began hitting his opponent (I remember his name was Pat Patterson) in the head. I was shaking and too traumatized to even turn away from the tableau on the TV. I had never seen someone having his face turned into a bloody pulp before. I was just a kid and didn’t realize that no one was really getting hurt, at least not as badly as they appeared to be hurt. But I didn’t want to watch wrestling on TV for many years after that.

My point in sharing this little bit of biographical information is to emphasize the fact that the younger you are the more impressionable you are and at a young age, depending on many different factors in your young life, you will either try to emulate what you see on the screen or you will be repulsed by it. Parents who act early to suppress bad behavior will be most successful. The way the world is now, a parent that doesn’t have a child’s behavior under control by the age of 10 has, very likely, already lost the battle. (I know this from experience.)

Breaking Bad is just a TV show and the Breaking Bad action figures, which are the actual subject of this post, are toys that will harm no one who is not already on the wrong course.

Toys R Us is a business and every business in America should be allowed to sell or not sell any LEGAL product or commodity without undue political (or media) influence. If people are unhappy with your business choices they will go somewhere else, all on their own, without petitions being signed and delivered by annoying people like Susan Schrivjer, the Florida mom who started the petition to save the world from two plastic action figures.