A very short article in the Star Phoenix Newspaper of Saskatoon (Saskatoon is a city in central Saskatchewan, Canada) by Starphoenix writer Conrad Romuld, protests the city’s “blessing” of Christianity by not removing “Merry Christmas” signs from the city buses.

Perhaps Mr. Romuld, as well as maybe millions of other ‘protesters’ have not taken the time to analyze “Christmas” and to understand that what was a solely Christian holy day has evolved (some would say devolved) into much more than a simple Christian holy day.

When a shopkeeper or retail clerk, a friend passing on the street or a sign on a city bus wishes you a “Merry Christmas,” it is highly unlikely the greeting has anything to do with the birth of the “son of God.” The greeting or wish “Merry Christmas,” in far more instances than not, is simply a recognition of the traditions that have grown around this Christian holiday. The traditions are giving gifts, having parties, spreading good cheer, exchanging “Christmas” cards, helping those in need, singing Christmas carols, decorating homes and businesses (and buses) with symbols of the season like Christmas bells, holly, Christmas trees, manger scenes, and Santa Clauses . . . and one tradition that was once a recognition of the actual Christian Holy Day but is now more of a ‘family’ tradition: attending a Christmas Eve service. Even if you don’t believe in the actual “reason for the season,” the music is sure to fill you with the “magic of the season.”

Christian protesters had better “pray” that Christmas and it’s associated traditions never go away, our economy depends on holidays like this one; they keep stores open and profitable, keep people employed and do a lot for those who have little but for the charity that goes along with the season; in other words: Christmas helps many, many people and harms virtually no one. It’s a perfect holiday!

I hope you all had a wonderful Christmas day . . . even all of my fellow atheists and agnostics. 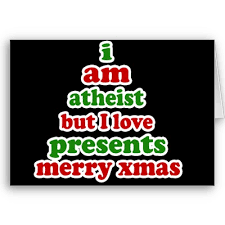 An Examiner.com article published Wednesday titled: Bill O’Reilly tells David Silverman: Christianity is not a religion is kind of a centerpiece for the annual Christian/Atheist media cage match.

As usual, there are atheists screaming that by making Christmas a National Holiday the government is “establishing” Christianity as our National Religion. The First Amendment to our Constitution expressly prohibits “the making of any law respecting an establishment of religion” but there is a great and continuing debate over the exact meaning of that particular phrase.

If it means, as the atheists claim, that the United States is prohibited from adopting an existing religion as a de facto national religion, the atheists are right. Hasn’t Christianity become our, at least unofficial, National Religion?

If, however, that phrase in the First Amendment is taken literally, i.e., the United States Congress cannot draft and pass a law that makes Christianity (or any other religion) the official religion of the United States, the atheists are wrong. There has been is no such law passed by Congress.

According to the Pew Forum on Religion & Public Life, 78.4% of all adults in the United States claim Christianity as their basic faith. I’d say that’s a majority and in a Democracy, the majority rules. No, that’s not just a trite phrase, in the United States that phrase means something — it is the basis of our entire election system. So if the Pew Forum results are accurate, one would have to assume that a national election on the question “If we adopt a National Religion which religion should be our National Religion”; it’s pretty certain that Christianity would win. Something like that is, of course, what the atheists may ultimately fear but it’s safe to say it will never happen.

That said, the atheists should not worry about national holidays and start concerning themselves with the influence of religion on the United States Congress. There are continuing pressures by Congress to ban abortion and gay marriage. These pressures are not brought about by Constitutional issues, they are clearly initiated by Senators and Representatives who are misusing their powers by allowing their own religious beliefs to interfere with their sworn oaths to “support the Constitution of the United States.” The Constitution does not suggest discrimination against same-gender marriages nor does allow the government to interfere with a doctor/patient decision to abort. Those are both religious prohibitions, so while the majority may not be protesting against the Christmas Holiday it certainly should be protesting Congressional Misfeasance; and the American Atheists, or a similar group, should be leading that charge.

Back to Bill O’Reilly

During his latest debate with David Silverman, the president of American Atheists, Bill O’Reilly made the incredible statement (incredible for a person who flaunts his Christian faith and believes in the power of words) that “Christianity is not a religion but merely a philosophy.” The ‘word-meister’ O’Reilly apparently made a misstatement and he will either admit that and correct it on his TV show or he will discredit himself further by arguing that he was right.

Every dictionary definition of Christianity, including the the Catholic Encyclopedia, defines Christianity as a religion, i.e., “a set of beliefs concerning the cause, nature, and purpose of the universe, especially when considered as the creation of a superhuman agency or agencies.”